The day began with a large breakfast, the same as ever. I went out with Kathryn, and we had lunch in a famous local restaurant called Turbot, where they claim to serve all food that is mentioned in the novels of Günther Grass. That kind of rounded my experience of Gdansk. The restaurant was really great. In a quiet sellar we sat on high chairs of incredible design, and ordered the offer of the day: cucumber soup and gulash. We expected a bowl with a brown hot substance, and when the friendly smiling waiter brought us two plates that were arranged in a haute cuisine fashion, we were surprised. And it was delicious! 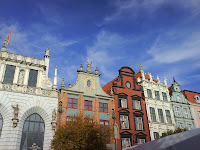 After lunch we walked through the old town, and enjoyed the classical townhouses with their tapered roofs. We visited the National Museum, where we found an interesting collection of Renaissance painting, as well as pottery and porcelain. My favorite painting was by a 17th century Dutchman of which I could swear, after exploring his stroke technique, that he was similar to Van Gogh. A lot of the paintings had a (from a secular perspective at least) pretty boring subject: heaven and hell. Burning drunkards and screeming sinful people on the right hand side of the panel, pious people with their hands folded together and their hands bend town before Peter on the left.

Back in the hostel, I wrote some postcards. I recall having put the Polish stamps on it, but not posting them until Vilnius, where I had to buy new stamps. Anyway, there was a young Korean girl called Kyong-Mi, who was very nice, and whom we would go and have a beer with later. In a hazy Irish Pub we had a few beers together (which we had to order in Polish). A group of American-Polish students joined us. 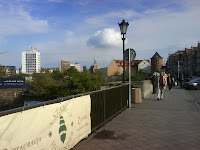