What Dante will have been 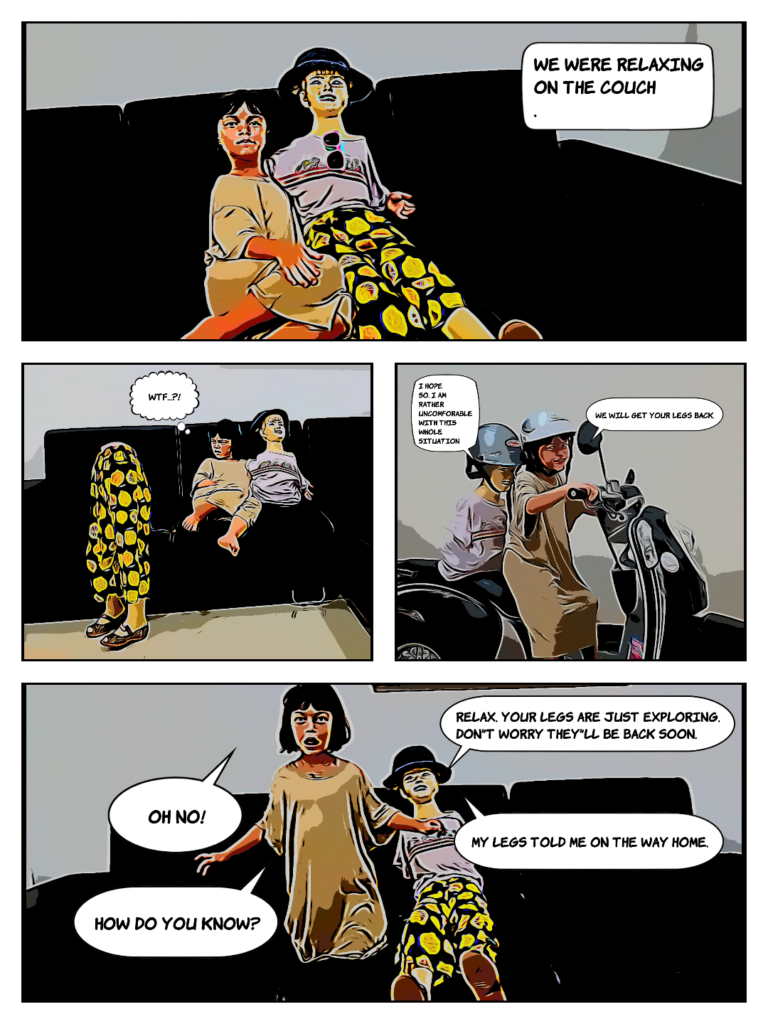 What are we waiting for?

The night is young

Here is an idea for a talk show. The host is seated behind a small desk and in front of him, there is a guest sitting in a segment of a giant rotating disc. Only that segment, resembling a pizza slice, is visible to the audience. The segment has sound-proof walls. The first guest is ...
28 May, 2020
carousel, intellectual, talkshow
Activism, The good life

I went to the moon

After we have felt, in our bodies, that we are still worthy even if we create nothing - how would we create? The corona crisis is a special time for nihilists. The clean separation of society in essential and non-essential activities signals that money is not the only dimension of meaning that informs our political ...
21 May, 2020
corona, meaning, nihilism, pandemic, politics, worth
Philosophy, The good life

In these restricted times, I have played around with Scratch, a programming tool for children developed by MIT. After some tinkering I came up with a simple maze game. I decided to make the game cooperative: the players have to share their ammo to defeat the sharks and reach the next level. They have to ...
10 May, 2020
cooperative, game, learning, maze, programming, scratch, video game
The good life

Your "talent" is not some magical force you can tap into, it has always been built up over time. You did that. Every talent you have, you have accumulated and that process started when you were conceived, in your mother's womb. "I don't have talent" is never an excuse. It is never too late to start building talent. Make the world your womb. Stay hard.
"What is the purpose of life?" "Mainly gloating over the misfortunes of others" "And you say evil comes from religion, huh?" "...And then there's irony." Christopher Hitchens

I never was much of an athlete. Think of the boy that is laughed at in school and never picked for the soccer team - you get the picture. I started running and even doing 5k, setting my goal at 10k has a markable effect. You don't need to run a marathon in order to ...
25 July, 2019
10k, exercise, food, Goggins, health, Hyman, PE, Pollan, running, walking
The good life
In the end, we are all big-brained monkeys with a limited capacity.

Aronia is a super berry. This is not a commercial blog so I won't give you a comprehensive overview of its benefits (just follow the link already). I have read a little bit about the berry, watched some videos and came to believe it is kinda good stuff. Since it was very hot here in ...
19 July, 2019
aronia, berries, recipe, slushy
The good life
Is literary writing the art of making cultivated loneliness feel like engaging conversation?
"A value debased and an illusion unmasked have the same pitiful form; they resemble each other and there is nothing easier than to mistake one for the other." From: The Joke by Milan Kundera
Whenever you find yourself on the side of the majority, it is time to pause and reflect. - Mark Twain

The notion that every single person considers themselves better in their particular interest than all others, is as long-standing a piece of bourgeois ideology as the overestimation of others as higher than oneself, just because they are the community of all customers. [The source of "likes"] Since the old bourgeois class has abdicated, both lead their afterlife in the Spirit [Geist] of intellectuals, who are at the same time the last enemies of the bourgeois, and the last bourgeois. By allowing themselves to still think at all vis-a-vis the naked reproduction of existence, they behave as the privileged; by leaving things in thought, they declare the nullity of their privilege. - Theodor W. Adorno, quoted by Babette Babich
There are more things between foreplay and orgasm, fellatio, than dreamt of in your philosophies.

Reflections On A Rainy Monday

To get the feeling that I have accomplished something today, and in the vein of embracing my imperfection, I begin this piece at 12:50 am. Where I write, in Seoul, Tuesday has already begun. For most of the people who potentially read this, Tuesday is still hours away. For them it is squarely Monday. Before ...
27 May, 2019
fear, freedom, night, reflections
The good life
OMG! If only there was enough mind to boggle!

Ode To Frans Timmermans and the EU

creativechoice is maintained with the help of its readers. if you enjoy what you are reading, please consider a small donation with Paypal:

Roadtrip best part for her

I sing of happiness in little things a daughter wh

To all who wished me a happy birthday on our belov

During the last days of a year that was filled wit

During the last days of a year that was filled wit