So I had been quite incredibly lucky: having been picked up by two such friendly people and invited to stay with them for a while. I remember I took my first real sauna in Finland the first night, and we talked at the fireplace, sitting between elk antlers and an old guitar. Rosanna is a very good vegan cook, and I never knew a meal without animal products could taste that good. We had a vegetable soup I really found delicious, and I went to bed very, very satisfied. 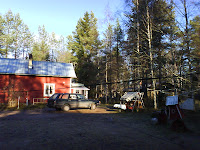 The next day we woke up late, and Sandom, a young boxer dog, showed me a few of his tricks. He can open the fridge and get a can out of it. He also closes the fridge with a firm slam. When Sandom practiced to get something hidden underneath the carpet, he had to bark several times to notify that he had succeeded. It were my reflexes that commanded me to say “ssst” after the first bark, which was not helping the training of course. The dog really seemed smarter than me after I caught myself trying to silence the dog twice. That day I wrote well, and finally repaired my shoes with textile glue I bought in the local shop using pretty much all of my Finnish. We made some music, and in the evening we had delicious Chapati bread, filled with lentils and rice. We listened to the funny English series “A hitchhiker’s guide to the galaxy”, of which my blog hopefully becomes a worthy addendum. 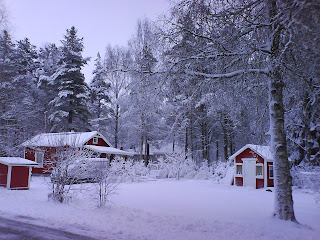 The next day I saw the first snow this year. The backyard was covered with a thick layer, and everything looked so different. I made a short morning walk, and started writing. Later, we walked in the woods with the three dogs, letting Sandom climb several rocks, and enjoying the late autumn colors. At night we had a real wood sauna, in a seperate sauna building, and it was awesome. We threw water with birch essence onto the coals, saying “loylya perkele” (steam up!) and it felt hot but healthy. The body manages not to get cold for a couple of minutes after getting out of that brutally hot sauna, which is the time we spent rolling in the snow naked.

The day after that Rosanna let me help her train Sandom. We went to a place in the forest nearby and she explained me what I had to do. Hide between the trees, taking a different route because the dog should pick up the smell from the air and not from the ground, kneeling down covering myself with a blanket and wait until the dog has found me and barked several times (as I already knew). Then I should jump up wildly and keep giving him food and attention, in order to give him a good experience with finding (a task which he accomplishes quite easily, what we were traing was his motivation of course). And after a few tries, Sandom did find me and I did dance around him, speak to him, and give him his reward. It was a very rewarding experience to me, too. 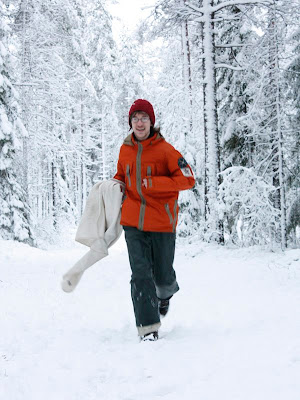 We also did some equipment searching, hiding four objects in a small area, which we covered with our traces by zigzagging it. The dog had to pick the smell from the air and not from the ground again. He was not yet very good at this, probably also because this was his first snow. But he eventually managed to find one object. The last accomplishment of the training should be rewarded more, to make the dog feel good. And he did indeed, wagging his tail and walking proudly in front of us on our way back to the house.

In the evening, we went to the local bar, where we had a beer together and made the juke-box play Elvis and Finnish songs for us.

Then it was sunday again. A good day for writing, which I enjoyed very much. In the evening we had an excellent meal again. Noodles, almonds, lentils, dried tomatoes, a sauce made from oat. And we saw a Finnish program called “madventures”, about two guys who traveled to a lot of destinations in Africa and Indochina. They filmed it together, and had it all assembled to a really good documentary film in a studio. I liked the way they combined teenager daunting and daring bungee-jumping, rat-eating and canyon-diving with a very serious message to the viewers.

I stayed there for six nights, and I had a great time.