The breakfast Andre offered me was very good. Especially the strong Portugese cheese called “Queijo da serra” was delicious. Go try that, dear reader, when you are in Portugal. Andre brought me to the bus station, where I bought my ticket to Oliveira do Hospital, a small city in the middle of the country. Then he showed me the Zoo next door, where a lot of fond memories from his childhood originated. He had been there every other weekend as a kid, but his last visit laid several years in the past. I took some pride in the fact that he revisited this place with me as a stranger. We took pictures in the zoo and just enjoyed the outlook of it. We said goodbye there and exchange emails adresses. He would go to Rio de Janeiro a couple 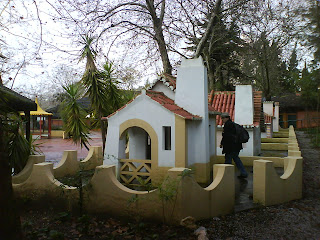 of days later, but we’d keep in touch via email.
Again, I had enjoyed some amazing hospitality from a total stranger, it felt so good. Of course, I don’t want to be the receiver all the time. One day, I’ll help other people out. I have sworn for example, to be a couchsurfer until the end of my days. Please remind me of that, when something with the power to corrupt gets hold of me.
I took out my small netbook, which really proved to be a writer’s best friend, and started typing on a sunny terrace in the zoo domain.

At 14:00 I took the bus to Oliveira. In the bus I continued typing with the little computer on my lap. Before getting dizzy and tired, I managed several pages. Then I laid back and enjoyed the landscape at both sides of the road. Even now, in late winter, the hills looked green and the valleys full of life. The trucks on the road were skewed. After Coimbra, where I had to change the bus (the Portugese transportation system it very good and punctual) the roads got smaller and the scenery more beautiful. Higher snow-covered peaks appeared on the horizon. Those about 2000 meter high peaks were in the Serra d’Estrela, Portugals highest mountains, as I learned a few hours later. 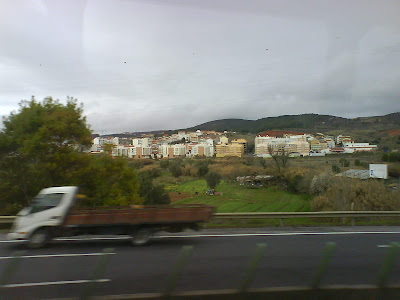 In Oliveira do Hospital I called my friend, and he arranged someone to pick me up. So I sat down for half an hour in cafe Portugal trying to make sense of a Portugese masculine magazine, as Charles and Luisa showed up. They greeted me kindly and brought me to a beautiful house in a nearby village. I was offered my own guestroom with an enormous bed and a bathroom – and almost thought “this is too much”. We spent the evening in the living room near the fire place, talking about literature and life in Portugal. The dog Jacco and the cat Napoleon had also chosen the warm room and stretched cosily on the carpet. The were not friends, but respected each other’s presence. It’s as good as it gets – as it is for the Israelians and the Palestinians our conversation had turned to. We shared some cautious hope about the new US government.
When we got tired of talking, the satellite tv was the perfect alternative. It received Dutch tv, on which I’d like to spend a word here. There are two talkshows referring to each other, that account pretty well for everything that happens in Holland. Pauw and Witteman, two acclaimed journalists, invite guests who are related to current issues, and its twin, the show DWDD (de wereld draait door=”the world is getting mad /going on”, where an eloquent panel of Dutch critics discusses with people picked from basicly the same pool i.e. polder. It was interesting to see both shows, it kept me in touch with the country I was born, and the language that I spoke with my mother.
We said goodnight and I felt like a little prince in the big bed.