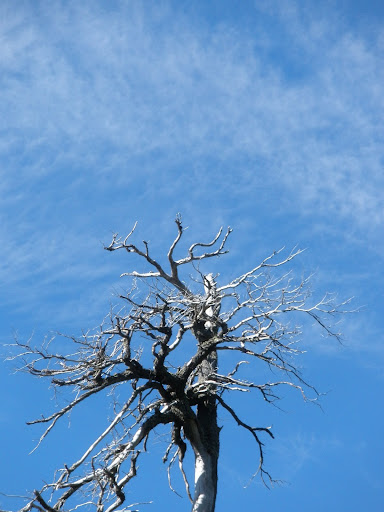 We walked around in Bariloche and found a place to stay in an hotel run by an old lady. She was the daughter of Germans who had moved to Argentina. This really doesn’t sound interesting. I have to skip it. She was friendly, spoke German very well and had those white hairs on her
head giving me the impression that she had lived through a lot of things. Her husband was dead for fifty years, she told us. The hotel-room was comfortable enough. The leak didn’t bother us; the beds were good and there was warm water. See, it gets boring again, I see and hear you yawn. It is of no use telling those kind of stories. Nobody cares. It’s an unhealthy vanity the wish to record it.

We went to the old lady’s hotel with Eris and Naddy two students from California and at night I suggested to go to the beach to make a campfire and maybe fry some food and have wine together. We bought two bottles of Argentinian wine that we shared that night. We didn’t
find any bigger branches so we ended up burning newspaper and cardboard thus producing a giant fume but it was a nice gathering we had avocado and chips and dried tomatoes and bread. I was satisfied, and I think they were too. I’m not an egoist, I’m not even a person. You can ask them if they liked it too. Please do. If they say they were satisfied too it won’t prove a thing though it won’t prove anybody is not an egoist. The I in the sentences I write is a sting that you can turn around to proof my egoism. Even the sentences without an I are drenched in the mud of my perspective: there is no escape, no matter how much we try. Within language we can never refrain from being self-centered and beyond language, drinking each other’s spit, rubbing each other’s skin, staring through the eyes at each other’s retinas, killing each other, reproducing – beyond language there’s no center hence no nearness. We are all caught up in this. Stressing the importance of other people’s pleasure, that’s my last reflex before dissolving the mind (a different story), the last thing I want to do consciously before retreating from speech and language and human utterances of any kind.