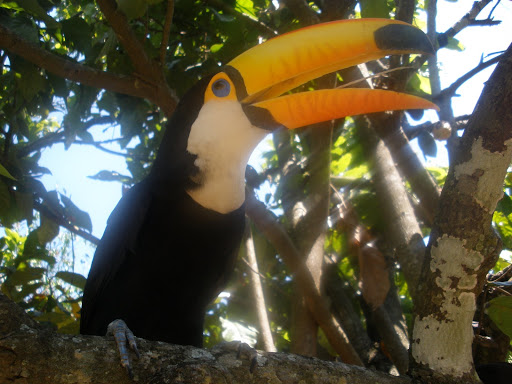 A photosession with the local toucan called Tuqui, the most fascinating resident of a house facing the Plaza Principal of Buenavista. He was hiding in the garden, but after some searching we found him sitting on a branch of a cacao tree. He gave kisses with his big yellow beak that is really not so strong. I had read somewhere in a guidebook that he could open seeds with it, but I am not really convinced that is the main reason for the existence of such a fine pecker. Could it not be also for esthetic reasons, at least a little bit? After all, we humans are rejoicing that toucan’s beauty and for that reason keeping the bird in our gardens and treating him well. His extravagant looks might have helped him to survive, protected by indigenous tribes – who knows? Tuqui jumped to another branch and looked down upon me as I tried to take his picture as he caught a thrown up cacao bean. He’s a good catcher. I took a whole series of photos that I can show proudly to my friends.

I like the fact that the display of my camera is broken. It gives me back the respect for the visible in the excitement about the result of the pictures that must remain unknown until they can be shown on some computer screen. Some photos come out beautiful, others are skewed, out of focus, blurry, cut-off. The photos that do come out well are received with a much more grateful attitude. In my case, the display broke as the result of my heedless shooting at the waterfall a week ago. Breaking it deliberately is still beyond my scope.

Wrote most of the day. A penetrating feeling that my writings have the tendency to be worthless. Continuing sin embargo, the mantra is somebody has to do this. Continuing with a guilty feeling of not creating value for the very society that nurtures me. Continuing despite of all this and more, believing not in a special code XY^cVt/Pi11 but in the accidental output of at least some chunks of words that induce sparkling shivers on your cold dorsums, dear readers.

Went to see the village orchestra. A young boy played the leading violin of a Vivaldi concierto after only two years. I was very much impressed by his talent. The practiced in the casa de cultura, facing the Plaza Principal as everything else. I adore village life for that! The orchestra consisted of young children and given the resources they had (instruments of doubtful Chinese manufacture, few teachers) the result was astonishing. I overheard the imperfections as I listened to them, feeling happy.

Earlier that day, a kitten bit me. That little murderous monster! And all I wanted to do was make him conquer his own fear by picking him up and giving him some piece of cracker as to show him there’s just no point in having fear. I guess the futily of fear is nothing you can show animals though. You can make humans believe fear is futile, and turn them into fearless, merciless killers. This cat will always act upon their primary reaction: running, meowing, scratching like a lunatic. So it left me with a few scratches on my right hand and the conviction that trying to anesthetize the structures of fear in mother nature is a bridge too far. Must stick to ourselves, there is fear enough in ourselves to play around with.

Life is very laid-back here, the foreigners assure me. The foreigners are well-known here. A French scientist, two Swiss guys with Bolivian spouses, an adventurous Englishman, a German shopowner are part of the small community. I talk to some of them in the local discotheque. A straw smiling German from Oberbayern has lived here for twenty years already, hanging out. I realize that this tranquilidad can also get boring. So I try to live up to an old credo, “how to make life more exciting than it actually is” and look for things that could do the job. What occurs to me is inventing something to flee from. I will ask you for a suggestion. What could it be that I am fleeing from? Could we not invent some kind of army, like the one that hunted Ché Guevara in this area back in 1967? The village where he was actually killed is not far from here. There is a clandestine museum baring his name, because the people who are the families of the soldiers his guerilla killed don’t like him and henceforth neither the communist banner he is associated with. We could invent some CIA hitmen with blinking derringers doing their best to take me out. Or a madman who has read too much on this blog and hunts me vigorously.