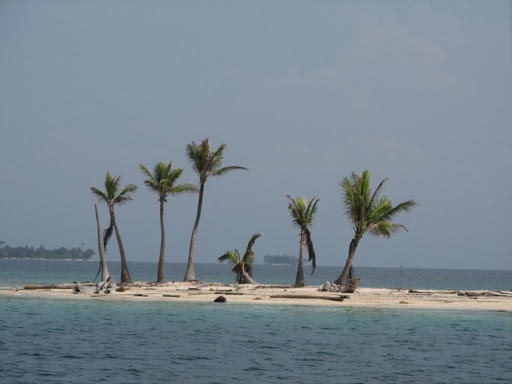 Our immigration is delayed one day for reasons of no importance. Meanwhile, we set sail to another Kuna island where we anchor on a nice spot and relax yet another beautiful day long. There are a few Kuna families living on this island, and the deal is that they cook us lunch. Before that we undertake a tour rowing the dinghy to a tiny island with only six palm trees on it, where we hang out for a while, simply enjoying the smallness of the island and the sun on our heads. The sky gets darker though, and soon we are embraced by heavy rain soaking our clothes. Karina and I decide to swim to a shipwreck we’ve discovered that morning. We proceed slowly because of the reef and treacherous rocks scratching our knees and ankles. The sun burns my shoulders, that have turned red like a lobster. Strong waves keep throwing us back onto the coral as we close in on the rusty vessel. I swallow too much seawater. Eventually we manage to climb on the wreckage from the back, where the waves strap and flood the stern, and begin to explore it. Hanging on a rope I find on the deck and tie to a pivot I look in the hull of the ship. It’s filled with dirty inky water, some wood is floating on it. I can’t see anything interesting when I dangle on that rope, enlarging my pupils to suit the darkness of the bilge. The engine room is not accessible. We don’t find human remains or sharks feasting on it. I keep dangling for a little while and then climb up the deck again. It still smells like oil here so the wreck is young. That’s right, the Kunas explain us later. It’s a Kuna fisher boat that stranded only one month ago. We climb into the cabin and confiscate the rugged Panamanian flag earlier ransacking has miraculously left on the steering wheel.

At lunchtime, we gather on the Kuna island for lunch. The Kunas serve us delicious fried fish, coconut rice, and boiled potatoes. I keep looking at the little pig that walks around freely and is allowed – after the dog – to lick the pot. I like pigs. The way they are kept here is so much better than what “we” westerners do, putting them away in cages where they can hardly move, far from the allegedly critical eye of the consumer. The pig as part of the family, I like that. The innocent little pig wagging its curly tail reminds us of our own cruelty. Yes, we will slaughter the pig, but at least we relate to our own natural cruelty as omnivorous hunters. It will allow us to limit our own cruelty rather than artificially eliminate it, and that’s a far less dangerous definition of humaneness than the hysterical anti-cruelty vows taken on the verge of hypocrisy.