In the middle of the night, I can’t stand it anymore. The mosquitos, that had shown their nasty presence as tactile fury yet had remained invisible to my eyes, got me jumping out of the bed and into the television room. My feet recover quickly and I perceive of the Irish guy that hangs on the couch zapping his way through what nocturnal Nicaraguan tv has in store. A bottle of four year old Flor de Caña lies under the table. When I join him on the lopsided cushions he askes me without turning his head:
“What’s your name where you from?”
His Irish accent (he is from Cork) is not so easy to decipher and when he starts mumbling away – face to tv – later on in our conversation I do my best to pretend I understand what he is saying.
“Doing Central America as well?”
Yes, I guess so. I am doing Central America. Like you do a whore. Getting all over her, leaving scratch marks everywhere, consume the prettiest features of her body, the lagunas, the volcanic mountains, the Aztec and Maya ruins, the colonial towns and enjoy the cheap beer. To make things easier, I admit I am doing her as well. In reality, as I hope to proof some day, I’m up to much more. I want to take the artistic road. The villagers on the street market with yellow bananas laden on a truck – I want to capture them in precise and pretty words. The indians in their unspoiled habitat, fishing from their wooden canoes like their great-grandparents used to do – I want to portray them as honestly 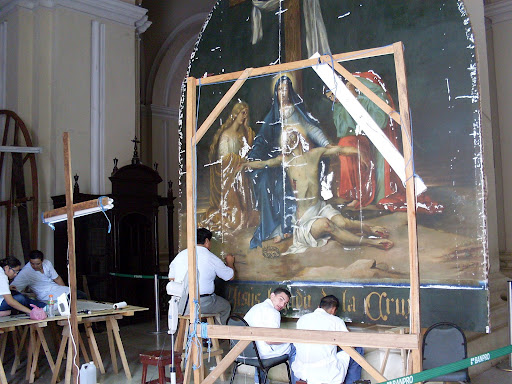 as I can. The natural splendour of the subcontinent, the small lizards that shoot away when I ascend on a mountain path – I want to write down their given names. But I don’t want to make things sound too complicated. So I’m just doing her, yes.
“How did you get the money to travel?”
Pardon me? Always this question. Do I have to be ashamed of my ability to save money? I explain the guy you can live on a budget while traveling if you don’t drink so much and couchsurf frequently. He seems to get it. Still, I don’t think the question is appropriate, not among total strangers. He continues educating me about documentaries.
“Loose change is good. And Zeitgeist. And I saw a documentary about the moonlanding. Do you believe human beings have landed on the moon?”
Or is it all a nasty complot? How SOOTHING a thought! We are smarter than history, smarter than schoolbooks, teachers, smarter than anything official! We are little gods, knowledge is the nectar we slurp straight from the internet, it makes us smarter than our neighbours, and comfortably ignorant of the fact that our neighbours are also smarter than us. I answer I couldn’t care less about people on the moon. It doesn’t affect me. That is the right answer in the quiz question. Bells ring, flashlights flash. The Irishman says:
“You got a point there.”
I got a point not being interested in the moonlanding because it doesn’t affect me. I should add that nothing affects me and hence I have no real interest at all (apart from writing and making love, so perhaps I should write about making love), but I don’t want to bother the guy. Why should I? I think our most valuable asset is genuine interest in something, anything. And I have a metaphore for it. Imagine a thread from your soul towards that certain thing, and imagine it is extended all over some nice place, that it connects you only with that certain thing via a large amount of pivots and pegs. You’ll keep following that thread over and over again and in the end you will recognize the pivots and pegs were the real thing. If the line from your soul towards that certain thing is too short, and it doesn’t contain any junctions, that’s – according to the metaphore – a sad thing. It’s a suitable description for drug addicts and the like. I took a sip from the Irishman’s Flor de caña and went back to the couch that replaced my hammock, using the hammock as a blanket to protect myself from the moscuito’s.

In the morning, I get some doughnuts on the street, and have a good breakfast in a place called “Los Bocaditos”. It feels good to write again, after a day of pure laguna leisure. And I haven’t been afraid yesterday about my muse leaving me for twenty-four hours. Let her play as freely as we play ourselves. Don’t attach strings to her, we’ll end up moving like marionettes ourselves because that’s the logic of freedom. The world is the Ultimate Theater, so we should make sure it doesn’t look like a just another Theater. Simple enough.

So I’m back in business. I am eager as ever to collect hilarious and heart-warming stories to unite mankind. I am getting on the “chicken bus”, as the 20-years-old Bavarian traveler Simon calls it, to Managua. Bus to Managua: guy called Jonathan, seemed older than me, but he was only 25. He had three kids, with two different wifes, he wasn’t together with them anymore. He worked as a legal controller of some kind, for companies for a salary of 200 dollars. 80 dollars for rent. He had this sad look in his eyes. Lived in an apartment alone, the mother of his children lived in his house, as I understood.

In Managua, the surrounding of the bus dropoff-point was a bit sketchy. I am the only gringo, and I am about to make a very painful mistake. Because so many people have warned me for the ferociousness of Managuans, I want to free myself as quickly as I can from the taxi drivers that storm to the minivan when it arrives.
“Taxi, sir? Ticabus, center, hotel, economico.”
-“No, no, no. Dejame solo.”
“Taxi, you need taxi sir.”
-“No me molestas!”
One of the guys is particularly insisting, and keeps following me. I get angry with him.
-“Quieres que llama a la policia?”
“Tu pasaje por el bus, el bus…”
-“Mira, Usted me esta molestando…”
“El b-u-s…”
-“O… perdon, mil veces perdon senor, dicculple, aqui tiene quarenta Córdobas.”
I’ve forgotten that I still have to pay my bus. It was so painful. I make up for my mistakes, repeating my sincere regrets and asking for the long distance-bus terminal. There are no buses for the day, so I decide to continue to Leon. Another bus takes me, I have my backpack on my lap and talk to a friendly mechanic.

In Leon, the friendly mechanic accompanies me to a hostel called “bigfoot”, the Lonely Planet Hostel of the year 2006, and the first hostel I’ve been in with a free pool in the patio. It is great. The travelers stick together though, and I don’t really feel like any more tourism. I want to get to know the view from within – at 9pm Rolando, the friendly mechanic, shows up at the hostel and we have a few beers together. In the course of a smooth man-to-man conversation, I learn some essential things about the country.

Rolando is 35, married with children, two boys age twelve and eight. He is particularly proud of his youngest sun , astronomy genius. buy laptop computer, guitar. Invites me for a beer, the Tona is the best in the world. Much better than Heineken, we agree upon that. It h 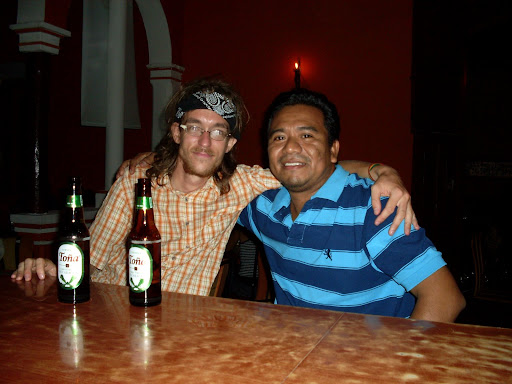 as been some time he had a night out, I understand. He is really friendly. We speak about girlfriends, traveling, the education of our children, international beer, the economy crisis, Obama’s rhetoric, women. I can see myself sitting there, at that bar in the town of Leon, talking to a new friend over a bottle of cold beer, just being a new guy. I love this kind of conversations.

We walk back to the hostel, or rather, he walks me back because I have lost my sense of orientation even after two beers. You can do volcano boarding here, it’s a unique sport invented by the American who runs the hoste. It means sliding off a steep volcano slope, getting all covered in dust as you make your way down at dazzling speed – but I like my conversations more.