Unfortunately the guard forgets to wake me up at 3am, so I leave at daylight. A local bus takes me from Leon to another town in Nicaragua. And yet another one. I sit in the buses and think about my life, my next big trip, the people I love and want to see again. Seeing the beautiful landscape through the bus window, repeating hopeful thoughts and considerations over and over again, it makes me kind of happy and sweaty. I am moving, at least not standing still. It depends on your perspective you say, and my perspective is moving I say.

The border with Honduras. I experience TOTAL HUMILIATION. As I get off the bus many annoying guys offer me a taxi ride to cross the bridge into Honduras. An old man is pulling my arm. What’s the price? Just a propina, a tip, they say. I hop on and they ride me across the bridge. I could have walked. Money changing: a guy – their conspirator – shows up with a bundle of banknotes. They tell me it’s not like the Costa Rican border here. There’s a house with a man and a woman and it’s all very official. They kind of force me to change some money. I give him a twenty dollar bill and tell him I only need fifteen changed. He does that and gives me a pile of Hondurean banknotes. I trust him, and I really can’t tell you why. We move on, I sign at a provisional desk that I’ve no symptoms of flu, show my passport, pay the entry fee for Honduras, all in the company of the friendly taxi drivers. The want to get paid. They won’t leave without my “tip”. I really liked one of the guys and since I wanted to sort out a t-shirt I give it to him. It’s a good t-shirt. He puts it on without any sign of gratitude and insists his buddy receives a dollar too. They disappear quickly and I ask about the exchange rate. It’s way higher than what I got. I am ripped off again. In exactly the same way, after I swore never to let it happen again. I feel dizzy. It is so humiliating. There is a component of anger: May they burn in the darkest chambers of hell, may their progreny be cursed until the thirteenth grade, that kind of stuff. But anger is not very nice. Wait a minute! I can learn from this. I breath quickly now. In and out, puffing. I can cope with it. It’s – ah! – just a humiliation. Be peaceful. Phlegmatic. Quiet. This can teach you so much. Don’t you want to be like the Buddha? If this doesn’t make you incandescent with hatred, as DJ would put it, nothing would. So I put on a smile and think about how this event can bring me further on my path towards wisdom. And, after all, ha! that’s much more than these few dollars.

That’s the kind of adventure the average traveler will tell you about (perhaps he tells he story a bit differently than I do): getting ripped off, stolen cameras, sunburns, missed flies a 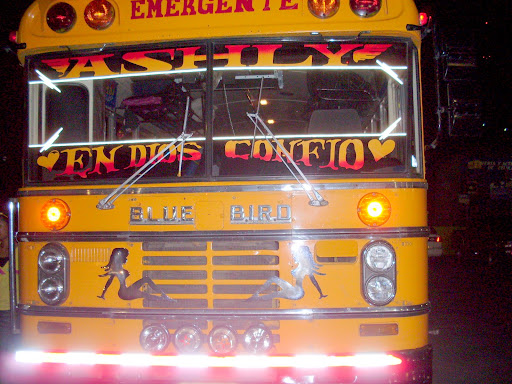 nd a leaking tap in the hotel room. That’s what happens when you’re traveling. O o, the world is so dangerous. I once heard a traveler speaking about the climax of his trip to central America: he was supposed to sleep with a prostitute in Costa Rica but she didn’t show up. The next day he reads in the newspaper that she’d been murdered. Of course, that’s something else. It pretty much defines your trip. But if you can’t remember anything more exciting than a rip-off by a money changer at a border crossing, you better rethink why you’re traveling in the first place. It’s not that you have to travel dangerously. It’s just that I want do things that have more complicated intentional structures than the usual “get optimal pleasure and optimally avoid pain”. I’ll come back to that later.

Yves from Mulhouse is a history teacher and fervent world traveler. We travel through Honduras together and have a nice conversation in Spanish. When we arrive at the El Salvador border he takes the bus straight to Guatemala and we say goodbye. The border crossing is funny by the way. I walk across the bridge (as you notice, most border crossings are bridges here) with a take-away meal from Honduras in my hand. I am asked where I stay and I say with a friend, since “couchsurfer” is not as well-known as it should be. Fortunately enough I remember the name of my couchsurfer and I’m trusted into El Salvador. I try to hitchhike again and it feels I’m back in business. The big trucks and the smell of diesel make me feel good. It’s not easy to get a ride though and there is some private accomodation available I decide to make use of.

Carbage. I throw the bag with the plastic plate of my Hondurean meal away like a good citizen. A dog takes the bag out of the barrel I had thrown it in and runs off with it, scattering the plastic bags and napkins all over the place like pimples on a adolescent’s face. Sometimes we should just care less.

I look around for a place. Again, I let my frugality generate some interesting events, and I see a weird guy on the street (grey beard, triple my chin flax) and as soon as I sit next to him he starts rattling about a variety of totally unrelated subjects. I try to reconstruct his account of life here, the way he delivered it for free upon my asking if he knows a place to spend the night:

“The Spanish language is getting too old now so there are no words for many things in the machine. Then: it is important know the machine for development in the mind. Then: we are floating around sometimes we use the Los Angeles police number too not always but sometimes you have to ask them to get a ticket if you want to. Then: in Spanish many words no exist and also the pharmacy for example you go to a pharmacy it is not possible in the Spanish. Then: it is very much important to call everything by its right name we have many parts of the machine we don’t know how to use and how to produce, I mean, food and flour and milk for the machine is not in Spanish. Then: there is a big asteroid and we are floating on the sky sometimes the asteroid attracts the earth, yes, and sometimes repels it for that reason it is very important know the pharmacy. Then: we work with the Los Angeles police sometimes, not always but sometimes they give the number where to go. Then: the Spanish language constructed for emotions and not for expressing the machine or pharmacy. Then: the parts of the machine have different names how to operate it sometimes our police helps too but not always you have to call Los Angeles police they have numbers you know, it’s important. Then: we are floating there is one dark asteroid it attracts the earth and repels just like that is the pharmacy to go do you understand? Then: we develop technology for the land and the machine to make food for the people it is very much important. Then: -“

His name is Maximilian, and I bet he is lonely. All characters have the name they are supposed to have here. I’m living inside a story here…

A woman offers me a hammock in her home for seven dollars. I wait in her roadside store for her to close away her things and take me home with her. Marvin, a Nica truck driver, comes to have his meal. His left hand is one of the few reminiscences from the civil war that waged here in the eighties. His middle finger is mutilated. He eats his meal and tells about his life on the road between Nicaragua and Mexico. Then he asks me what I do.
“I’m a writer.”
-“Then you have a problem.”
“What’s that? No dinero?”
-“No, you writers are always busy writing, thinking only about writing as your first priority. It is a problem if you get married. Because women need a lot of attention.”
“Ah, I see. So I guess I’m not a real writer then. I want my wife to be the most important thing in my life. How is that for you?”
-“The most important is God, he comes in the firsts place. On second place is myself como hombre; my wife is third and my children come in the fourth place.”
“And your work?”
-“My work? Ah, in the ultima posición.”
“I like that. Working is only temporary.”
-“Yes, and what really matters is for eternity.” 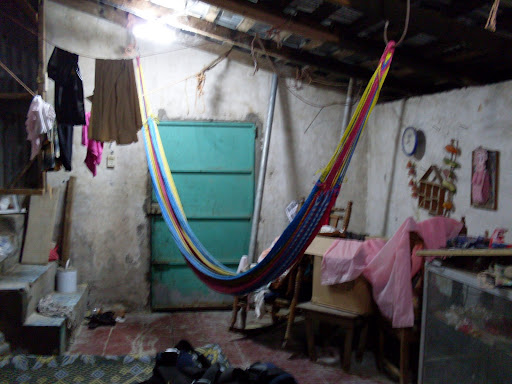 The woman that offers me a hammock (and a bed without a mattress) is living with her 75-year-old father. I see an old man in the porch, lying in another hammock and hissing at their three brown dogs. The house is a total chaos. The pungent smell of dog faeces; the dusty cobwebs all over the concrete ceiling; the rusty machetes lying around; the burnt-out vanilla candles; the old furniture piled up against the wall; the corroding iron doors; the laundry drying on dirty lines in the middle of the room. And amidst all that the all-encompassing love of a solitary woman for her senile father. Yes, and what really matters is for eternity.

I sleep well in that hammock.

One thought on “May 28. Total humiliation apprentice.”