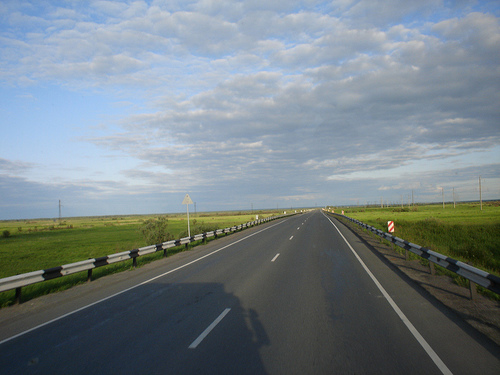 Victor has been robbed. They took 2000 dollar from him, he tells us. Now he is on his way to Novosibirsk and beyond to see his family. He travels with an electric guitar and “on the road” is a nice book if you travel by thumb and I pay for his coffee that is cheap anyway. Lot of information in a sentence like that, some ironic distance, some genuine experience, hopefully some of the marches and the sloughs of being too. So, we share a coffee with him. He is a nice guy. But he travels in the opposite direction. We managed to catch a ride quickly, a man with bad teeth and a small calender with barebreasted girls on his dashboard takes us some 200 kilometers further. When we reach his village we say goodbye and have a cup of coffee in another service station. If you think this is gonna be boring, you’re wrong. Next thing that happens when we install ourselves thumbs-up on the road again:
A black Audi quattro stops and we get a ride all the way to Ufa. Driver’s name is Yuri and he grew up in Siberia. Because of his German ancestry, he was looked down upon and decided to move to Essen. When he comes over with his formidable vehicle, he now gets a lot of respect. The Geman, as he was called in his childhood, has been successful. A black Audi quattro means success, I guess.
A police car pulls us over and asks for a license.
I am sleeping on the backseat, but here’s a reconstruction of the conversation.
“A real license please.”
-“This is a valid international drivers license.”
“No, we need a real license.”
-“This is a real one. You can have it.”
“Then you have to come to the police station, sir. And pay like 2500 rubles…”
-“…and mention one of you has been drinking?”
“How do you know?”
-“I can smell, I can tell.”
“Well, in that case we don’t have a problem. Have a nice day sir.”
The same policemen are drinking beer at a gas station when we pass later. I am back in Europe, by the way.