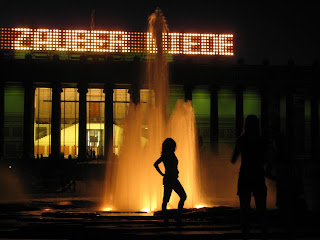 The countdown has already started. In four days Charity Travel officially start – two days before world food day at october 16th. Checklists are full, crosses drawn on them, I try to think of something I might have forgotten but I can’t. Monday I’ll pick up the tickets and tuesday I’ll drive to Wiesbaden using Mitfahrgelegenheit.de and giving the right example right there. Today was low-key. Preparations on the internet: facebook, twitter, microlinks, youtube, myspace, and so on. I picked up my Charity Travel t-shirt and then went to a mosque. There is a pretty mosque in Berlin Kolumbiadamm. Washing feet and kneeling on a carpet. A man was just singing Allahu-akbar through a microphone and the sound satiated the dome. Only a few people were praying, and that does not include me. I was just wondering what the beautiful Arab inscriptions meant and thinking that in case Allah does exist this would be a good place to ask him for his blessings. So I opened my camel-colored jacket and showed Him my new charity travel t-shirt. Perhaps He likes the idea. In that case, I am humbled, just like wartime presidents are humbled by Nobel peace prizes, in that case it means that by following my heart I will do His will. I could try to formulate a prayer.

“O dear God, my humble mind cannot find a way to know if You exist, nor can it know your qualities. But my humble mind has reflected upon the concept of the Good, yes I have reflected upon thousands of years of philosophy and I have spoken with friends of different convictions. And this, dear God, is my best chance to do something that might coincide with Your Will. Please let the findings of my humble mind not be a dillusion, and let my concept of the Good be the essence of Your plan for the world. Amen.”

Satisfied and smiling I jump on my bike and drove to a supermarket, where of course a Romanian girl is selling the homeless newspaper, but of course I already have the edition she is offering. So of course I speak to her in ugly fragmented Italian and ask if she want to come in and buy some things. She comes with me and takes tomatoes and cola. I pay and smile. The girl tells me she has two little children.
Where am I? The Romanian woman. She thanks me and makes me feel good. At night we go to a café and it is simply beautiful.