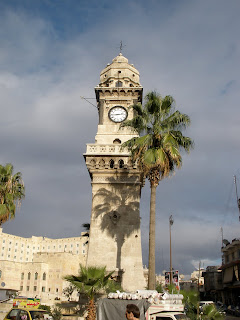 The other charities I was to support in Aleppo need bureaucracy, and that makes me sad. A friendly couchsurfer knew a couple of them but this is what they needed. They need some official writing of my government telling them that is has an agreement with Syria. My government! The government of the country that issued my passport? What does that help them? Does it make my dollars any cleaner? I do not want to help them. I curse bureaucracy once more, knowing that I will live only in this world, that is so absolutely drenched in it, knowing that it will kill me in the end. That could be a nice t-shirt slogan by the way, “bureaucracy will kill me in the end”. But until that day, I will stand up against it, and I hope you stand up with me. And so I take the bus to Beirut, where I hope to find a more accessible ways of donating some money to the needy. A Dutch couchsurfer suggested I could work together with Hezbollah. Would create a nice shocker, and perhaps even an argument why you should after all be interested in my amazing adventure.
On a dusty afternoon, I leave from Aleppo and the bus radio is playing compelling Arab rhythms. As the bus zips along the outskirts of Aleppo, I try to imagine what life is like for the people living here. I see endless rows of beige concrete buildings, and they are expanding the city, which has already far over one million people into the dessert.  Houses that are inhabited are recognizabel by the rusty satellite dishes on top of them. If there is any universal thing about our species, we find it in the ingeniuous ways we have invented to fight boredom. All over the world, where boredom can no longer be avoided by strict religious ruling there is an inevitable need for something we know as entertainment, and that stretches from all varieties of story-telling to more direct ways of getting the right hormone cocktail auto-injected in our veins. Name one institution that doesn’t exist essentially to conquer boredom. When I have time again, and access to a library, I promise to write more on the anthropology of boredom, perhaps as an hommage to Levi-Strauss who died a few years ago, age 100. I assume he has lived a very exciting life.

We cross the border, I only need a twelve dollar exit card. On the tv screen I see beautiful Arab women swining their heads in a way that is best described as headbanging, showing as much as possible of their shiny black hair. It was the absolute opposite of their completely veiled counterparts I had seen in some conservative areas of Aleppo.

In the darkness we drive along the main road, and I feel happy as we pass “Alu Saab pret a porter”, “shoe avenue”, “white city boutique”, and “wooden bakery”. Those smooth American slogans…

I go to a café in downtown Beirut and work a little bit. I contact my host and get lucky: she can pick me up on the way since she is taking a taxi home. So I wait in front of the blue dome mosque until a woman’s hand waves at me from a taxi. A very pretty woman welcomes me to Beirut and we introduce ourselves as the taxi takes us home. Mona is working for a UN project working on rural development project throughout the Arab world. We have a short conversation introducing ourselves, switching to French at a certain point. I have a good night on the couch.