Later than planned, well, the whole concept of planning erodes like the barren soil of deforestated plains, we leave for Kogelo, the village where Obama’s grandmother and aunt live. I must tell you straight away it’s a publicity thing. Visiting this village, saying hello to the grandmother of the officially most powerful man – i don’t know. Maybe I am wrong. We take a matatu under the hot sun, followed by a ride on three motorbikes that brings us to the gate of the Obama estate. An officer asks us to write our names in a book that we are not allowed to go through. After all, we could identify the names of the visitors and do God knows what. Maximum security. The grandmother is taking lunch and she is not very strong now because she has malaria. Nevertheless, she comes to shake our hands and kindly asks us if we have any questions. I don’t want to bother her introducing to the idea of Charity Travel, and neither do I want to ask to confirm the cliché that she is proud of her grandson. But Phillip tells Obama’s aunt about our movement and they’ll be in touch. After all, there were a couple of Swiss guys installing solar panels here, and our orphanage wants one of those.
Mrs. Obama is very kind and patient, and visibly enjoying her routine job of greeting visitors from around the world. There are a few other visitors around that are seated in a neat circle as Mrs. Obama asks everyone to introduce himself. This cannot capture the experience, which was not surreal but could be seen as surreal because of the bloodties to Mr. president. I fail here to put my emotion to paper and would like to ask you to look at my other venture, Charity Travel, that is equally dilettant, but keeps me going for a couple of years. At least. Just don’t read this blog, read another one. 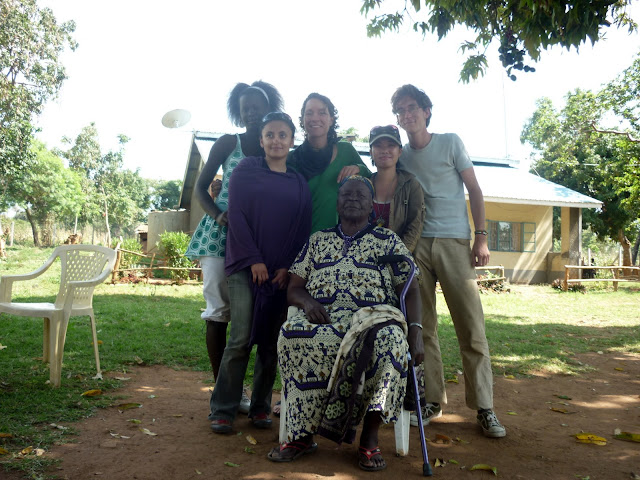 The visit has a serene atmosphere. We see the graves of Obamas forefathers and take plenty of photos with his grandmother, just like every other visitor. The motorbike has a plug problem so we get a ride back. In the car I tell about Charity Travel again, and harvest the thick grain of praise again. Another matatu brings us to Kisumu where we arrange ourselves with the virtual world and Yeon and I skip a sweaty rave. No words – no air.

One thought on “January 16. Obama’s grandmother.”