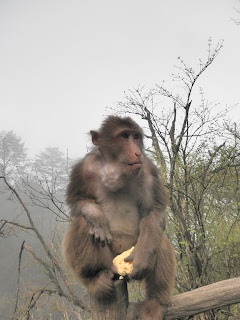 We haven’t given up our quest for Chinese ngo’s, not yet. I make phone calls: they hang up on me. Jane Goodall foundation? Winrock foundation? PLAN China? Forget it. But Dhane tells us he knows that some poor earthquake victims have been relocated to a Chengdu hospital and if we could find out where they are we could support them and their suffering communities directly. Sounds like a good idea, and we walk into a building where a friendly man at a counter sends us to the Red Cross, that is to a bulky state controlled organization. We try to explain that we want to write an article about independent charity work and its possibility in China, but aren’t understood.
In the afternoon, we head back to Lichiqong who explains me then that for some reason, it is better to give up the idea and NOT donate to the families. Is there a soldier standing at every bed? Is it undermining the state when individuals support each other? I want to yell, but I nod quietly. In the end, we don’t even visit a hospital, we see no poor earthquake victims introducing smart community programs to us that need some monetary supprt – and get a bad taste about Chinese state-controlled aid. We will be enlightened tomorrow, but today, we sleep unsatisfied.