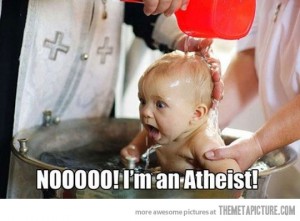 Our daughter is 66 days old now and most of her actions are reflexes of the hunger she feels, the discomfort her skin communicates to her, the sounds she hears and the blotches of color we assume she sees. She smiles a lot, and we’ve been tempted to attribute that to her character, but read in one of our baby books that she has yet to develop one.

Which she will of course, and this side of her development that is out of our control triggered a healthy series of “What if” questions. Our basic attitude as artists is that it is always better to reach out with our fantasy to all her possibilities, to stretch our imagination to the gamut of her potential, than to protect the image we have of her future person into being exactly as we wish she would be.

I think parents should make an effort depicting their child in roles they wouldn’t endorse, and ponder the possibility of it becoming a reality, without choosing the funny way out like here in the Woody Allen musical “Everyone says I love you”.

What if our child turns out to be a conservative republican? What if she – despite our best efforts to educate her as a civilized human being – will hold views that make us shiver? How would we react? Would I panic and ask for my will, and an eraser? Or would we try to Obamize her into a card house of compromises?

What if our child is religious? What if she starts praying to an entity she calls God, and takes herself very seriously? Would I drive her to church? Would I support her listening to the intolerant, fear-mongering, unscientific ramblings of some costumed or plain reverend?

It would take a tremendous effort on our side to cope with these scenarios. Let’s not exclude them all preemptively, but let’s not torture ourselves with such fantasies until we’ve received the first worrisome signals. After all, she will have to get the cue for her character from somewhere, lack of oxygen in the brain alone doesn’t produce an Ayn Rand or a Joyce Meyer. It is the influence of her environment, notably the many screens and speakers that will continuously try to rewire her fragile brain.

It is against this crime that I will try to write next time.

Verily, I say unto thee that we will rejoice in most of the possibilities her character turns out to realize, along with the fact itself that she has manifold possibilities at her disposal. With the exception of overtly or covertly antisocial and intolerant behavior, we will laud her being, among many other things, gay, straight, bi, socialist, anarchist, democrat, liberal, primitivist, computer-freak, nudist, prude, girly, boyish, flamboyant, crazy, sportive, foodie, philosopher, drama queen, poet, farmer, or revolutionary.