[series-miru]
The last episode of this series that I’m writing for my daughter appeared many months ago. This is not because there was nothing interesting in between, but because I couldn’t find the time and motivation to write. We have been traveling, and had some bureaucratic issues to take care of regarding our simultaneous “legal” existance in one locality. Let me say no more than that it’s an adequate source of revolutionary vitamins.

Miru isn’t concerned with any of this, she is just starting to explore and win her world, and you can imagine what a joy that is to see. As a father, I’m thankful.

We often play peek-a-boo, usually by covering my own eyes with my hand, or hiding behind the door and then suddenly remove the hand and say “kiekeboe”, the Dutch version (I speak Dutch to her). A few days ago, I took this to a next level and put a towel over her face. After a little while, she had learned to remove it and the moment she had accomplished this novel task, I yelled, of course, “kiekeboe!” 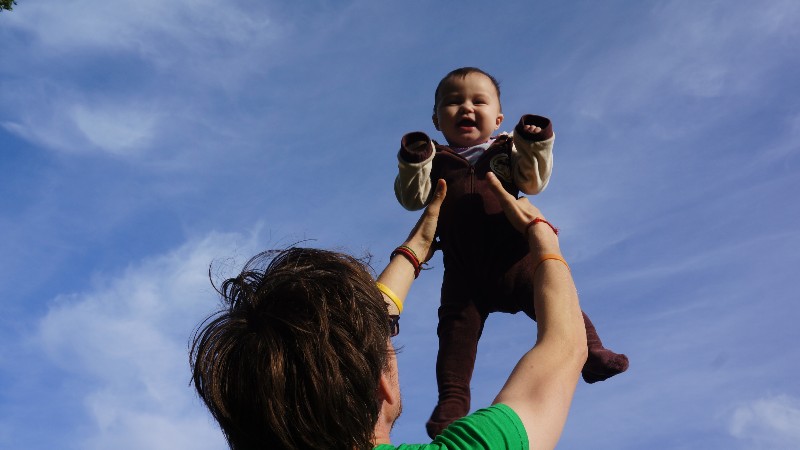 I feel tired, the words don’t come the way I want them too, but that’s the beauty and the healing power of language. We, or at least that part of us that engages in linguistic exchange, are written, the words, experienced through a hazy midnight brain like I experience them now, have a certain materiality, a life of their own, and they decide what this mind is thinking. They are part of a web of associations, and it is not our mind that is navigating that web, but some unconscious processes string the words together – all our minds do in this state is comparable to genetic aberrations, gene mutations resulting in new strands of DNA and new experimental word strings, it’s all in vain, I studied philosophy without really having the kind of mind that it takes, and the kind of interest in conceptual cleanliness that I do respect very much and that will be the seed of many revolutions – I don’t have a comfortable sitting position and my neck hurts, my table is too high, and my eyes are closing – having words as friends, mute but patient, playing, underlining the importance of play, leveraging play because it means salvation, deliverance; we need to play our existence here so there will be room to overcome the deadly consequences of the excesses of our species seriousness but this is not a time to think, I have closed my eyes so I can’t see the words appear on the screen in front of me. my brain exists for what to be a messenger, but of what? is there anything I could write here that doesn’t reek of a sectarian brainwash, of mental manipulation, and isn’t the “system” precisely that kind of mental manipulation where the illusion of freedom is optimized, the systemic quality of humankind in its current form where most people can act as individuals because there is exactly enough of the mental cancer inside them, there is enough advertisement and peer pressure to make it all function, the world of the cubicle is optimized slave labor there is nothing more efficient than moving the slave driver inside the heads of the oppressed, than taking away the only thing a slave could fight for and colonize that very word: freedom, my eyes are closed still and I feel a little bit like Ray Charles, of course, I play more dissonnants and comparing isn’t always right, but I have this image in my head of Ray bending over a piano with so much love, moving his head and smiling. Such is our relation to what we are expressing my friends let us not take ourselves too seriously, we are here, we live in the same time on the same planet I am a very practical mind I don’t think the “waking up” will be some sort of mass hysteria with magical handshakes between the Jews and the Palestinians, but of course it will help when the inevitable memes of goodness, of harmony, stewardship, sisterhood, sustainability, everything that could only be criticized because it is boring – which criticism we can now readily rebuke by pointing out that we are moving closer and closer to a live-and-dead situation creating a unique challenge for our species that will take away the very conditions that allow you to think boredom and here we are midnight has passed another day of virtual reality in the big city has begun no, my mind is functional it is serving other purposes than myself yet it is not enslaved, the freedom we mean is literally there, it is what we mean you want more freedom give yourself more fantasy but also, and against Sartre, we mean as earthlings we need physical freedom our own garden and the absence from the mind of voices speaking from a different elevation than our own.

Miru will start to talk soon, and I promise myself to observe and write about that.