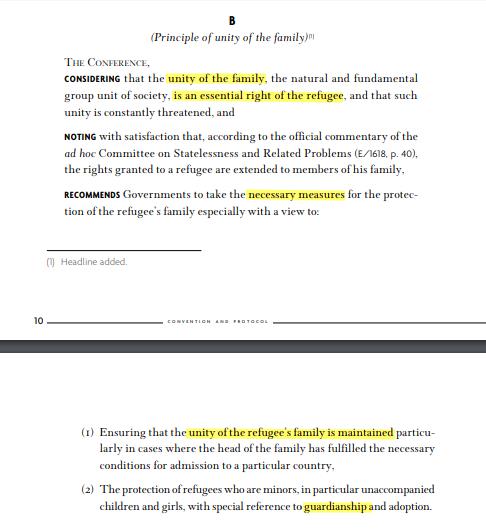 The Refugee Convention entered into force on 22 April 1954.

In the above text, we look at the word particularly. We note that it does not mean exclusively. Even if the head of the family (which we should consider an outdated term, but can still understand) has not fulfilled the necessary conditions for admission to a particular country, the Convention “recommends” governments to take the necessary measures.

But what are the “necessary measures” if such measures are perceived to conflict with “national safety interests”. And what precisely means “recommends”? The dictionary states “to push for something”.

Listen, this is no match for Trump, the Artist of the Deal. Why is the verb here not “obligate”?

The United Nations now urges the US to stop separating children from their families at the border. According to a spokesperson, “The use of immigration detention and family separation as a deterrent runs counter to human rights standards and principles.” She asks that Washington adopts non-custodial alternatives that allow children to remain with their families. Fair enough.

The human drama is terrifying and I don’t see no political solution soon. Trump supporters, and indeed Trump himself, are quick to blame Democrats for passing the original laws that led to this catastrophy. I am worried that Trump defenders are reluctant to change their opinion and speak up to their peers, fearing to be ostracized. It is easy to get on the Trump Train, but you can not jump off.

A slippery slope and ‘Gazafication’ of the US – Mexico border looms over the current events. What if people approaching the border would be shot at sight (admittedly an unlikely scenario, despite extremist toads who demand so)? I can already hear the propaganda claims: It is the right of the US to defend itself. Illegal immigrants are criminals. I already see them quoting dubious crime statistics produced by the Cato institute. And I see hordes of American citizens accepting these claims. The ‘fire and fury’ of such violent border protection measures would translate into laudable toughness and a sense of ‘something is finally being done for our safety’, at least in the feeble indoctrinated minds of Trump’s following. Any critique of Trump’s actions will become increasingly harder as it will be dismissed as unpatriotic. This small step tactics has been adopted by other dictators (dixit Fox news) before.

I don’t apologize for the Godwin, if you have perceived one, dear reader.