My second day in Vilnius began with a simple breakfast together with the cleaning ladies. They were really working too hard, vacuum cleaning the community room several times, and doing my dishes, despite of a paper on the wall that read

Your mum doesn’t work here,
so wash everything you use by yourself.

I pointed at it, or at the Lithuanian translation of it, and earned a proper smile.
In our hostel was a young man, more like a boy, who was using the internet all the time. He looked a little bit strange and it annoyed me because I wanted to work on the computer he was using.

I went for a walk again, explored more of Vilnius’ Old Town, saw some beautiful churches actually. An interesting aspect was the blend of styles. There was a church with gothic as well as Byzantine elements that looked like a fairy tale building. As I went inside an old woman gave me strange looks – because I hadn’t bought and lit a candle, I discovered soon afterwards. The lord wants to be worshipped, and that means to be paid for.

A cafe engulped me shortly after that, and I wrote a couple of pages under influence of very good coffee. Later on, I went back to the cafe I had been the other day and ordered the soup of the day again. At the table next to me, an illuster trio had an interesting conversation. An older Russian with a grey beard, a middle aged Lithuanian man that looked a little bit like the killer in No Country For Old Men, and a little fragile lady, sitting between the two literary colossae and asking them about their opinion about the play they had just seen together. The Russian talked about the impossibility to translate Tchechov, and the younger man about the plays he had staged recently, and that the youth was spoiled of course. They had a funny term for it, vidiots, ie. idiots watching only video, with an ever narrower frame of concentration.

My own concentration dropped below productivity level, and I left. Back in the hostel, I ran into an older and balder man. He introduced himself as John and repeatedly added “Hallelujah!”. He carried a guitar with him and sang enthusiastically for Jesus. We walked through Vilnius together, in search of something small to eat, and we ended up in a 24-hour supermarket where we found nutella. For those familiar to it, it makes you feel really good… 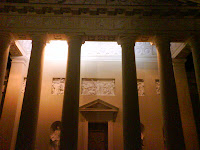