The overnight bus took me all the way to the Lithuanian capital, where I arrived around ten. I went straight to the “A” Hostel, a place which was cheap and functional. I slept in a Japanese pod-bed, that is a tiny cabin per person, ten in a dormitory. I threw my backpack on the mattress, paid the bed in advance and went for a walk. It was a short walk to the Old Town, and from a Belarusian woman with beautiful shining blue eyes I learned about a ‘cafe de Paris’, and decided to go there that night. I went to some cafe, opened my notebook and wrote a couple of hours. 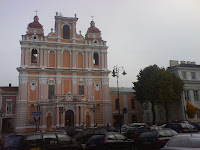 When I became hungry I went back to the hostel, cooked some noodles in the water heater, and mixed them with peanuts and crab stick I bought in the supermarket. The result was a real calorie rich meal that I enjoyed in solitude. In the background the BBC analyzed the current financial crisis on a large flat screen TV, I learned about the near bankruptcy of the country of Iceland, among other things.

In the evening I went to the French cafe and had a glass of local cider. Always go for the local products, they are more affordable, they taste better, and the have a smaller ecological footprint! I studied a magazine with a few articles offered both in Lithuanian and in English, but got not far. I joined a group of female students in a conversation about nothing special.

The night was quiet, and I must have spent it looking fascinated at the breaking of the light in the bathroom.