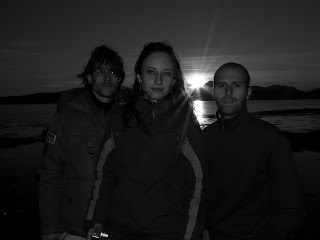 Saturday. We woke up early, had some breakfast with Piita, scrubbed our car window, took in some groceries and gas, and headed north-west. We had a long drive ahead of us, through beautiful unspoiled land, first on the Finnish side, and then in Norway. Still on the Finnish side, we stopped over in a roadside shop, where they sold coffee and muffins, as well as postcards. I decided to send one with the aurora borealis (Northern Lights). I also saw some stuffed animals in the shop, among them a wolverine, the fascinating furry killer that doesn’t look like one, and is unfortunately near extinction. The also had a stuffed brown bear, which of course had to pose for our photos. I laid my hand in the bear claw and took a picture of that, saying “that’s Obama negotiating without preconditions to untamed dangerous world leaders in Iran and North Korea”. We fed the reindeer that lived there behind a gate. Tasos got himself a wooden mug with his name carved it in, and a reindoor bone stirring rod.

We crossed the border to Norway. It was the first time for all four of us to visit that country. The road to Tromsø was just terrific, and we got out of the car at the first shores, where Veronika and I tasted the water to make sure it was salty. We took some pictures there, with the beautiful background of smooth snow-covered hills and the reflecting water.

In Tromsø, after parking the car, we walked to Driv, a student’s bar with internet connection, and there we ran into Melanie, who agreed upon being our Couchsurfing host that night. We went to her place and cooked some pasta, then went out with a big group. First, we went to some party (which is usual in Norway, most likely because of the insane prices of everything with alcohol in it in pubs). We had a great time talking to various people, most of them were a 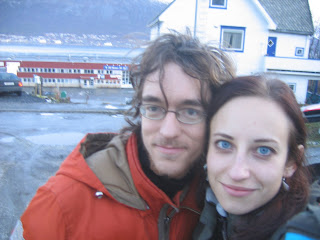 ctually in the couchsurfing network as well. I spoke to a Palestinian who just received his degree in telemedicine from the University of Tromsø. The hospital is a reknowned centre for telemedicine (operations over long distances) probably because it is so far away from almost everything and it has numerous skilled medicins. Then there was a Brazilian biologist who wanted to travel to Spitsbergen (Svalbård), possibly with me, but soon we learned from a German biologist who had done his plant research there (yes, there grow about 100 species) that up there (80 degrees latitude) it is almost dark already, and it would be much more spectacular to go there late winter. A Kirkenes local later confirmed this. I also enjoyed the company of some Polish girls, who were great talking to. And there was Richard of course, a very young cook who had lived in France. I called him the new Bocuse, and he called me Michael Jackson’s brother, since yes I had to dance again that day.

With this group we went to a bar. Unfortunately age restrictions are very tight (and narrow-minded) and Richard was not allowed to come in. We moved on as a group to a bar called circa and had a great time there. Finally, I saw Tasos dancing as well, just like he promised us. We went home about 2am, and slept well in Melanie’s place.