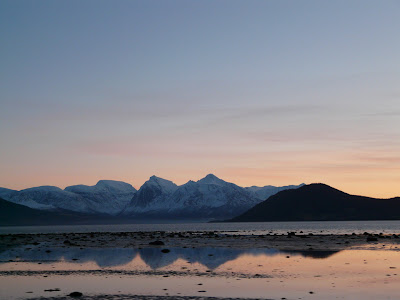 [ picture of the Tromsø Fjord, thanks again to Tasos ]
I got a bit sad about the fact we’d split and I’d be alone again, and I felt some loneliness. But that is also a writer’s drug, and I try to be a writer. On our way back to Rovaniemi, we drove through a large tunnel complex with several underground junctions. Loneliness and underground junctions, sounds poetic doesn’t it?

Back at Melanie’s place I said goodbye to the others, and they drove back to Rovaniemi, and did some writing. The day passed, nothing special, and the next day too. I explored Tromsø a little bit, gazed at the Amundsen statue and dreamed about the Northpole, and stunned in front of Europe’s northernmost cathedral in Europe’s northernmost city with presumably more bars per capita than anywhere else.

I cooked a simple meal with rice, eggs (thereby overcoming an early trauma of rice ‘n eggs that I made as a kid and that was so groce that they kept reminding me). This time it was actually quiet good, and it kept me fit. I began to feel the long hours of darkness around here though, and laid down on the couch for a good night’s sleep.