I arrived savely in Moscow. And met many nice Russians.

The first night I stayed in a hostel, for a change. Ann had given me the adress, and it was – for Moscovian measures – very cheap (650 rubles). I took a good shower and had some coffee, before walking around in the center. Ann showed me a luxurious shopping mall, the Red Square and the Kreml, from there I walked through the park, where I saw the monument of a soldier with an eternal flame and very stiff guards. In a supermarket I bought some cheap dry Russian bread because my roubles had gone out, and biting on it I crossed a bridge over the Moskva, with a view of the Kreml on the right, and the most important Russian Orthodox church on the other side. I walked on, shared my bread with a beggar on the way, passed the Bolshoi theater opposite Revolution Square, and went back to the hostel. Enough for a first impression of this giant metropole. 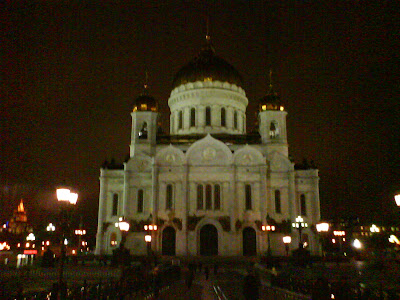 There was a German guy who started talking about dubious business deals of selling Champion’s League tickets on the black market and erotic affairs he had with a girl in Russia. He kept talking and talking about it, and I kept nodding dimly. I wish I had the presence of mind to look him straight in the eyes and say something like “yes and yes and I have been in a brothel too where they offered me booze and coke and pussy all for free o yes so what is the big deal tough guy tell me you think yur something yo i’m not yur daddy” but I don’t have that type of presence of mind. Anyway, there also was a Nigerian man who was a relieve because he was silent and made a serious impression.
I got a little bit hungry and cooked myself some couscous other guests had left there, and put in chopped black olives, salt, pepper, soy sauce, sugar, dried persil. And it actually tasted pretty good. @Survival Manual: how to cook something out of nothing, a recommendation for philosophers because a) they tend to think about nothingness and b) they tend to see nothingness when they open their wallet, if they have one.

That night I updated this blog and saw on the internet (cnn.com) what had happenend in Mumbai. I kept staring at the live coverage, in a remembrance of 9/11 until 4 am. Then I went to bed.

One thought on “Moscow. Puh-ha!”