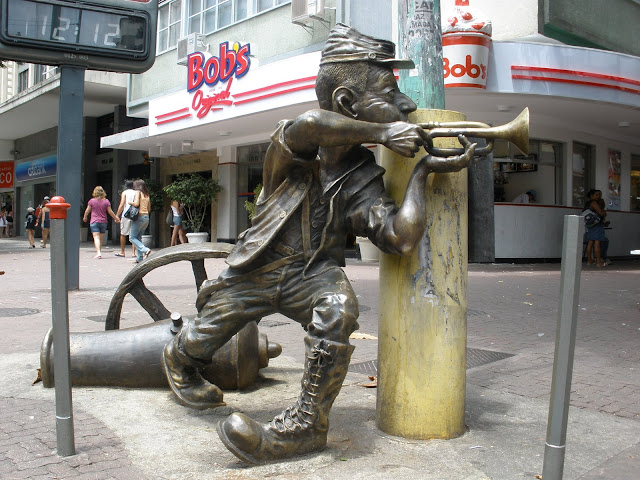 And it’s all so simple: just meet that person who has the same difference. O, stop it. Stop the abstractions and start something creamy, thick, moldy, liquid, crooked, crumbled, something smelling of steaming fresh asphalt, like pulpy orange juice, like boiling fat, something cobalt blue covered in colophony and eucalyptus honey, something Schostakovitschly brasslike, bulky, boisterously Byzantine, like bold flakes of snow pristine, something coalesced, amalgamated, molten together like two loafs of Mozarella cheese, impure ulcerations on scratched tissue, something like a dinosaur egg, something ancient deeply buried in the earth’s crest –
Dancing under the arches of the Lapa Aquaduct had been enough. It had been great and enough. I danced on the Largo Machado for half an hour. Jack wants to dance still more, he just feels like it. He’s all set and tries to convince me to come with him. I was reluctant but Jack tries to convince me. Annoying prick. Why am I traveling with this guy anyway? Why is this Jack character constantly on my back? I must try to get rid of him. I’ll try to develop a strategy to put Jack off. Maybe I can dump him in some poor neighbourhood where the people have to make ends meet on a day-by-day basis? Maybe he fits in there with his temper. He will have his food, his women, his fresh dreams. Before he starts missing me I can be far away. And I’ll never have to hear of him and his escapades again. Never hear of his passive absorption of the fiercest of moral codes with his goddamn pristine saintly mind. Let him rot with that unbearable arrogance he steals from us. But how to get rid of Jack? Personally bringing him to a Favela and then turn my back on him? Taking him to the Sambadromo and making his eyes stick to the movement of one of the Samba groups that parade by, to sneak out myself? I don’t know. I have difficulties leaving him alone. Sometimes he fascinates me.
The day passed in a lazy fashion. I took too much time getting to the bus station just to make sure I was on time. It was ridiculous. All those extra hours waiting on a dirty floor, hand in my pocket to protect its contents, worrying restlessly about what could go wrong. That bus could not show up, pickpockets could empty my pockets, I could lose my ticket, there could be an accident, the luggage could get lost. Useless and ugly worries. Worries Jack would never think about.

A travel bus in Brazil. If you pay, you get value. A lot of leg space and cold air is blown relentlessly through the coach. I am cold and get out my jacket during a stopover. The driver opens the luggage bin. He also checks all the tires with a little hammer. The taps on the tires maybe he is patting my shoulders to make my worries go away. If offer my quick drying towel as a blanket to the woman next to me, but she kindly rejects. My neck hurts despite of all the comfort and I have to snap the joints tomorrow. Jack has fallen asleep. I feel responsible for him so I take him with me. Who knows what might become of him when I leave him alone in a big city like Rio? He lives from a second to the next and that’s exactly when you get shot. Poor Jack would get shot when he walks into a Favela, so that his chest would be perforated and his blood spoiled. Shot by the man with the big machine gun because he tries to kiss his girlfriend. Jack doesn’t know Nicolas, he has not been warned for the danger of going into a Favela. No, Jack has to come with me. But I refuse to be his shadow, he must be mine.
I will see sunrise upon arrival in Sao Paolo, one of the largest cities on the surface of our blue planet. Perhaps something new awaits the traveler?