There is an old joke about a German, a Frenchman and an Englishman telling each other the word for butterfly in their native tongue. “Butterfly”, the soft-spoken English gentleman whispers and you could almost hear the movement of a perfect specimen in his voice. “Papillon”, murmurs the Frenchman, and his friends are enchanted by the word that mimics the essence of the beautiful insect so well. They both look at the German, who clears his throat and barks “Schmetterling”, while slamming his fist on the table. 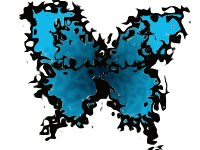 In fact, the word for “butterfly” is very diverse as they are native in so many regions and there are over 180,000 different butterfly species. And the word sounds beautiful indeed in most languages, from the Spanish “mariposa” to the Italian “farfalle” or the Korean “nabi” and the Dutch “vlinder”, all words seem to adequately express the elegance of the butterfly.


Here you can see for yourself. I omitted the name of the language since it is irrelevant, it is the sound that matters (alphabets uncommon for the Western eye have been transliterated):


All these pretty denominations, all this verbal sophistication greatly enriches our world – I wouldn’t want to live in a world where I would have to refer to these beautiful creatures as annoying flies that are attracted to butter, or “Schmetter”, the root of the German Schmetterling.