Let me come on with an attitude and say I’ll debunk a myth today. Inspired once again by our baby daughter Miru, I started questioning the common belief that babies don’t share. A quick look-up on the BrinPage machine (i.e. Google) confirmed that this is indeed what our experts think.

Why? Because “So basically what I’m saying is that there’s no chance on earth than an 8-month-old should be able to share. A child that age isn’t even remotely close to being able to understand the concept.”

Because they don’t have the concept.

Fair enough, but what about tribal people wh 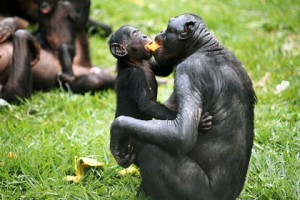 o seem to share the fruit of their land as a matter of course, naturally, people who haven’t developed the conceptual tokens of Western grammar to express the concept of “I” am sharing “this” with “you”. And what about animals? Bonobos have been observed to share food with strangers.
(the finding of the Duke University experiment is very interesting, so I decided to share it here, however I the sight of the metal cage makes me sad, and I do not endorse it)

So, what if sharing doesn’t really depend on the ability to “understand the concept”? What if it lies deeper within us? What if the assumption that the need to master a highly sophisticated conceptual framework in order to share is so obviously preposterous that we don’t even notice. Of course, sharing is the most natural thing to do. From an evolutionary perspective, sharing has many advantages, from simple group survival to social bonding.

I’m sure there have been many thinkers before me, who played with the same idea, but it’s too late to look them up now. We need to learn from the cute bonobo’s and immediately acquire their innate kindness to strangers because it will be a crucial tool in the near future for the survival of our bipedal primate species. Besides, it’s almost 5 am.

I think we need to look at sharing at face value, without making the assumption that the infant primate is for example programmed to be selfish, that all its endeavors can be reduced to the most pressing one: the literal incorporation of food into its body. Perhaps there are other instincts that can’t be reduced to the “selfish” one of taking from one’s surroundings the energy to survive. Who knows?

What if we take the idea of a “body schema” and ask if the bodies of others (siblings, parents) could be a part of that? Why not? We are still talking about the pre-conceptual infant who allegedly isn’t able to share. The internal landscape of her “body schema” could as well include extremities and organs that are not connected to her brain by direct neuronal links, but rather by the empathic perception of her relatives. There’s nothing esoteric about that. Sure, this “empathic perception” is “mere” instinct, but that doesn’t disqualify it. It is what it is: emotional attachment and connectedness.

I believe that my mouth might be part of Miru’s extended body schema. When she is eating a piece of fruit (usually a plum or a peach), and I smile at her and open my mouth. At ten months, she puts the fruit straight into my mouth. She does this with the greatest precision you can expect given her still developing hand-eye coördination. Perhaps she doesn’t have the concept of her “own mouth” either. She just puts the fruit in the nearest mouth available because she has just mastered the link food-mouth. “But that’s not sharing”, certain scientists, who seem to be on a mission to disenchant the world, would say. “That’s mere instinct.”

Does it matter? Come on, what if we just share in silence, and develop those concepts post hoc, when some journalist with some sense of style wishes to write about it? We, as humanity, had a rough childhood full of violence. We were killing each other even before we had a concept of self and other. When we grew up, we developed all the concepts we liked. We could “prove” human nature to be whatever we liked. Hurrah! Which concepts have survived the longest, which notions had the strongest impact, or: which grammar does best support the dominant economic system? There you go. Babies don’t share. Because you need a concept for that. And we need the concept of concepts to tell ourselves that human nature is whatever we find convenient.